In a previous post, we built up an understanding of convolutional neural networks, without referring to any significant mathematics. To go further, however, we need to understand convolutions.

Thankfully, with a few examples, convolution beco)mes quite a straightforward idea.

Lessons from a Dropped Ball

Imagine we drop a ball from some height onto the ground, where it only has one dimension of motion. How likely is it that a ball will go a distance \(c\) if you drop it and then drop it again from above the point at which it landed?

Let’s break this down. After the first drop, it will land \(a\) units away from the starting point with probability \(f(a)\), where \(f\) is the probability distribution.

Now after this first drop, we pick the ball up and drop it from another height above the point where it first landed. The probability of the ball rolling \(b\) units away from the new starting point is \(g(b)\), where \(g\) may be a different probability distribution if it’s dropped from a different height. 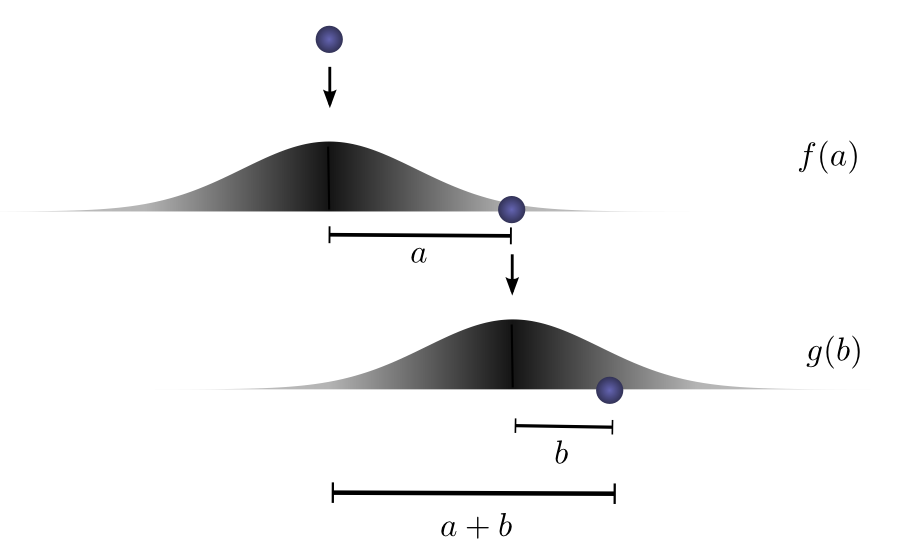 In order to find the total likelihood of the ball reaching a total distance of \(c\), we can’t consider only one possible way of reaching \(c\). Instead, we consider all the possible ways of partitioning \(c\) into two drops \(a\) and \(b\) and sum over the probability of each way.

This is the standard definition2 of convolution.

To make this a bit more concrete, we can think about this in terms of positions the ball might land. After the first drop, it will land at an intermediate position \(a\) with probability \(f(a)\). If it lands at \(a\), it has probability \(g(c-a)\) of landing at a position \(c\).

To get the convolution, we consider all intermediate positions.

There’s a very nice trick that helps one think about convolutions more easily.

If we know the ball lands at a position \(c\) after the second drop, what is the probability that the previous position was \(a\)? 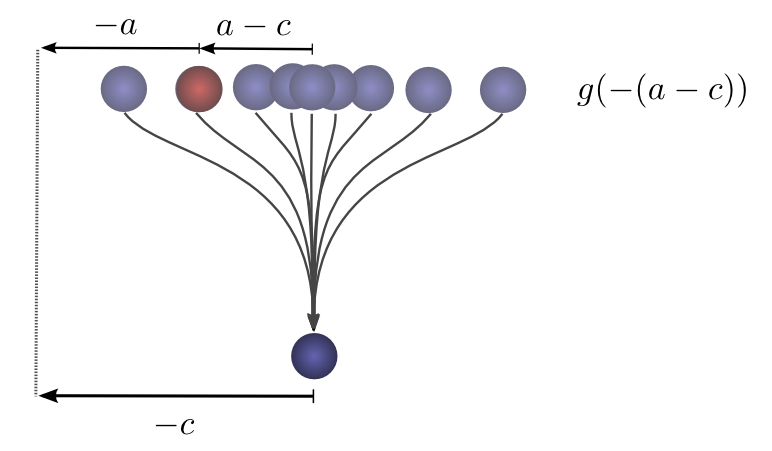 Summing over the \(a\)s, we get the convolution.

For example, we can see that it peaks when the distributions align. 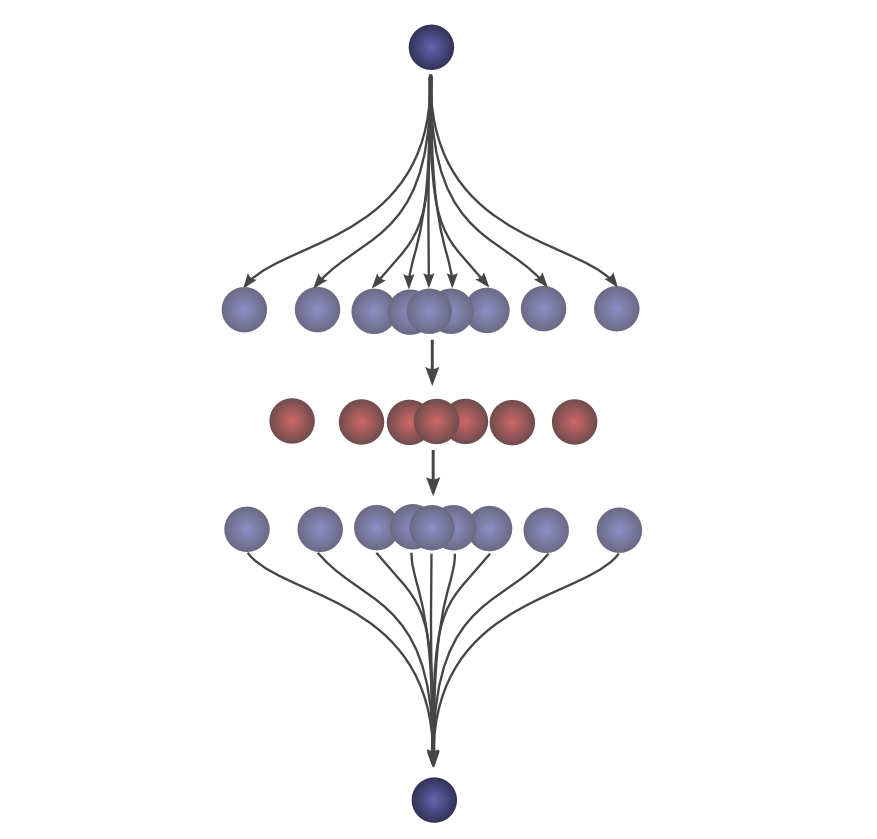 And shrinks as the intersection between the distributions gets smaller. 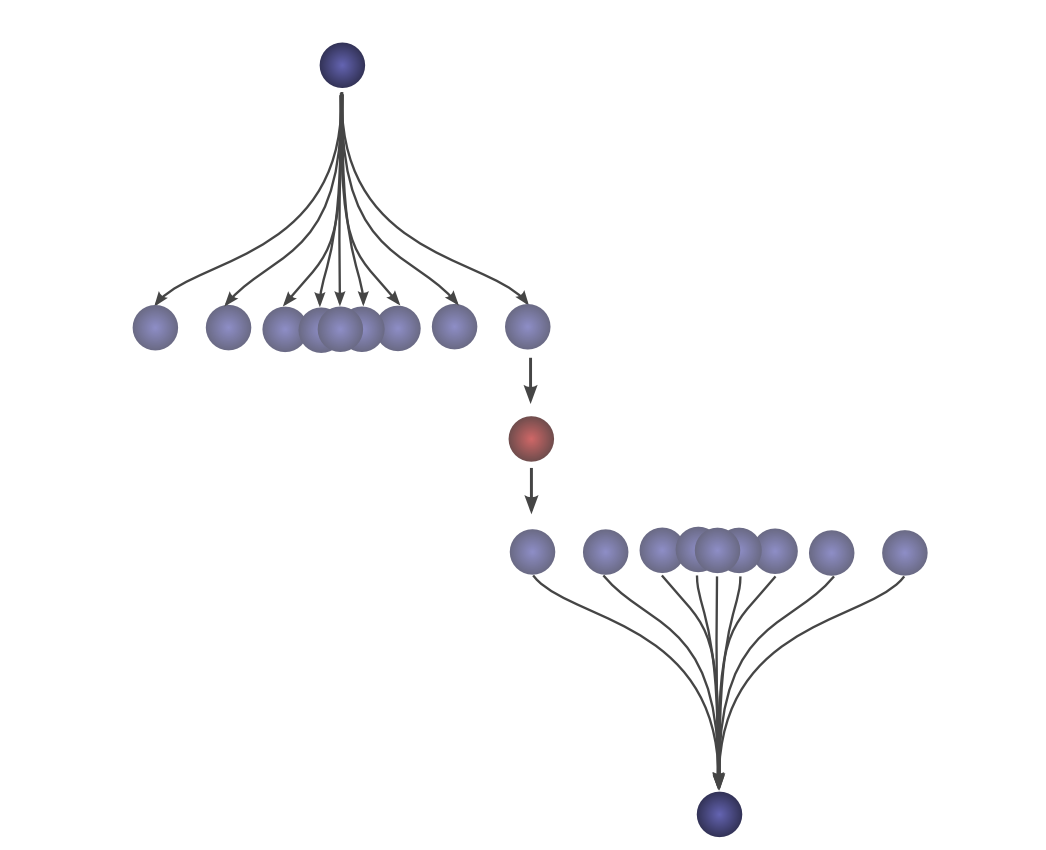 By using this trick in an animation, it really becomes possible to visually understand convolutions.

Below, we’re able to visualize the convolution of two box functions:

Armed with this perspective, a lot of things become more intuitive.

Let’s consider a non-probabilistic example. Convolutions are sometimes used in audio manipulation. For example, one might use a function with two spikes in it, but zero everywhere else, to create an echo. As our double-spiked function slides, one spike hits a point in time first, adding that signal to the output sound, and later, another spike follows, adding a second, delayed copy.

Convolutions are an extremely general idea. We can also use them in a higher number of dimensions.

Let’s consider our example of a falling ball again. Now, as it falls, it’s position shifts not only in one dimension, but in two. 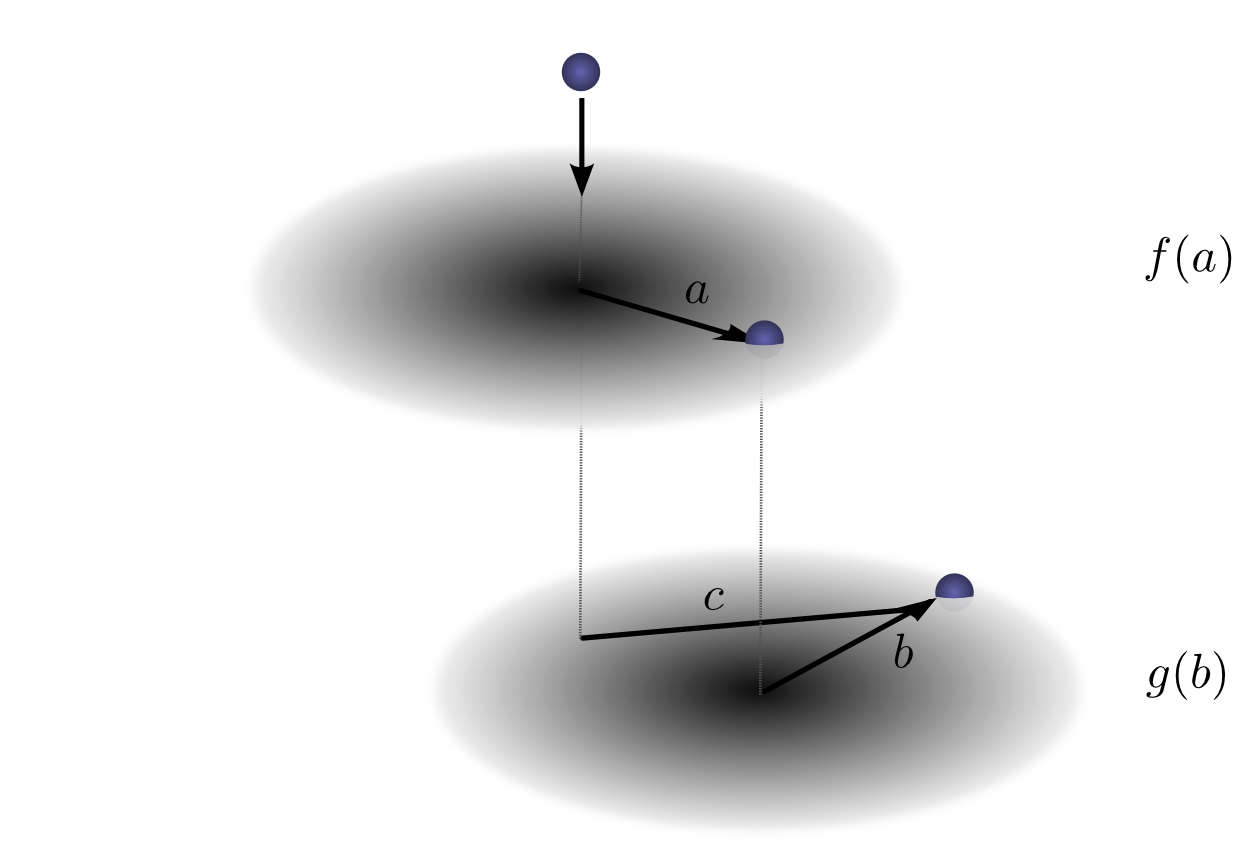 Convolution is the same as before:

Or in the standard definition:

One common application of this is image processing. We can think of images as two-dimensional functions. Many important image transformations are convolutions where you convolve the image function with a very small, local function called a “kernel.” 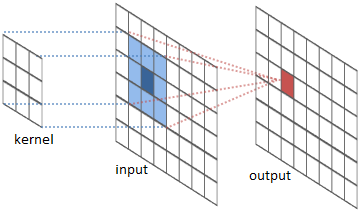 From the River Trail documentation

The kernel slides to every position of the image and computes a new pixel as a weighted sum of the pixels it floats over.

For example, by averaging a 3x3 box of pixels, we can blur an image. To do this, our kernel takes the value \(1/9\) on each pixel in the box,

Derived from the Gimp documentation 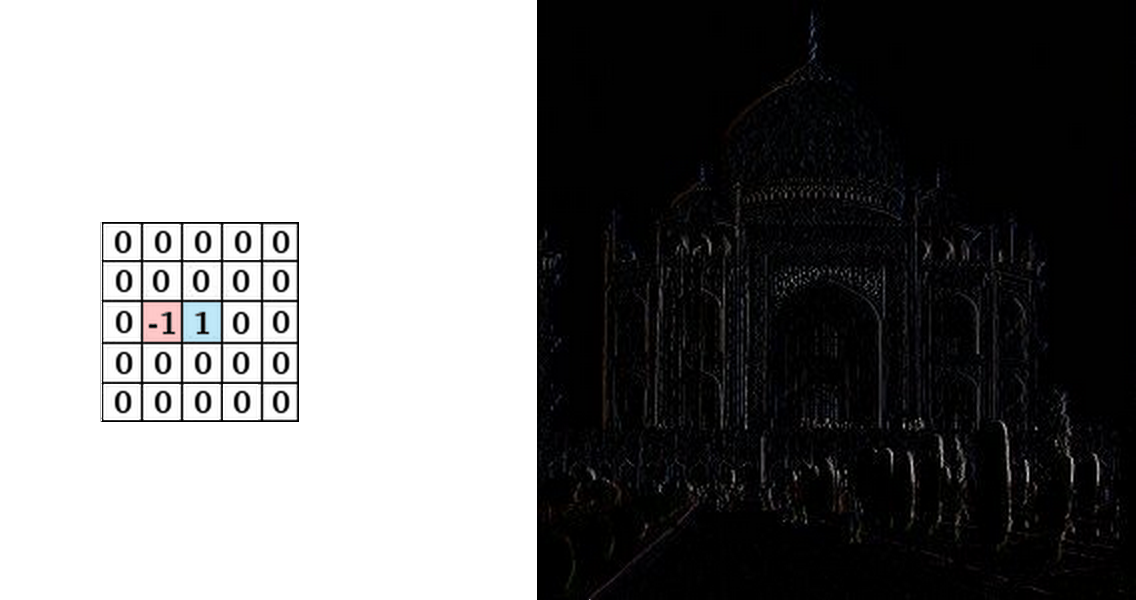 Derived from the Gimp documentation

The gimp documentation has many other examples.

Consider a 1-dimensional convolutional layer with inputs \(\{x_n\}\) and outputs \(\{y_n\}\), like we discussed in the previous post:

As we observed, we can describe the outputs in terms of the inputs:

Generally, \(A\) would be multiple neurons. But suppose it is a single neuron for a moment.

Recall that a typical neuron in a neural network is described by:

It’s this wiring of neurons, describing all the weights and which ones are identical, that convolution will handle for us.

Typically, we describe all the neurons in a layer at once, rather than individually. The trick is to have a weight matrix, \(W\):

For example, we get:

Each row of the matrix describes the weights connecting a neuron to its inputs.

Returning to the convolutional layer, though, because there are multiple copies of the same neuron, many weights appear in multiple positions.

Which corresponds to the equations:

So while, normally, a weight matrix connects every input to every neuron with different weights:

The matrix for a convolutional layer like the one above looks quite different. The same weights appear in a bunch of positions. And because neurons don’t connect to many possible inputs, there’s lots of zeros.

Multiplying by the above matrix is the same thing as convolving with \([...0, w_1, w_0, 0...]\). The function sliding to different positions corresponds to having neurons at those positions.

What about two-dimensional convolutional layers?

We introduced a lot of mathematical machinery in this blog post, but it may not be obvious what we gained. Convolution is obviously a useful tool in probability theory and computer graphics, but what do we gain from phrasing convolutional neural networks in terms of convolutions?

The first advantage is that we have some very powerful language for describing the wiring of networks. The examples we’ve dealt with so far haven’t been complicated enough for this benefit to become clear, but convolutions will allow us to get rid of huge amounts of unpleasant book-keeping for us.

Secondly, convolutions come with significant implementational advantages. Many libraries provide highly efficient convolution routines. Further, while convolution naively appears to be an \(O(n^2)\) operation, using some rather deep mathematical insights, it is possible to create a \(O(n\log(n))\) implementation. We will discuss this in much greater detail in a future post.

In fact, the use of highly-efficient parallel convolution implementations on GPUs has been essential to recent progress in computer vision.

Next Posts in this Series

This post is part of a series on convolutional neural networks and their generalizations. The first two posts will be review for those familiar with deep learning, while later ones should be of interest to everyone. To get updates, subscribe to my RSS feed!

Please comment below or on the side. Pull requests can be made on github.

I’m extremely grateful to Eliana Lorch, for extensive discussion of convolutions and help writing this post.

I’m also grateful to Michael Nielsen and Dario Amodei for their comments and support.