In this article I will talk in depth about the Angular 2 change detection system.

An Angular 2 application is a tree of components. 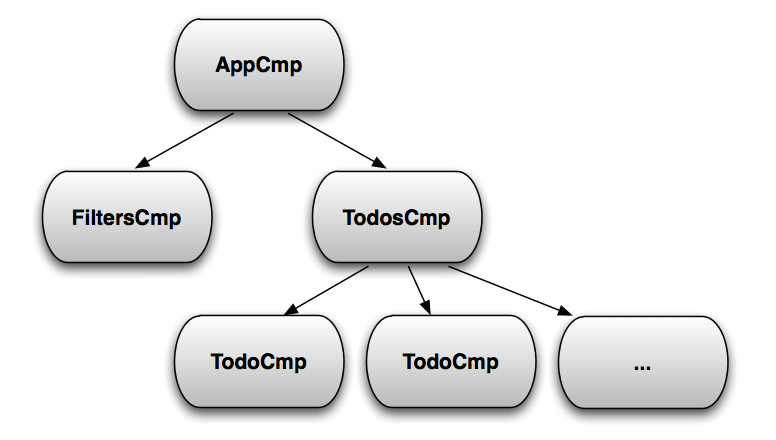 An Angular 2 application is a reactive system, with change detection being the core of it.

Every component gets a change detector responsible for checking the bindings defined in its template. Examples of bindings: {{todo.text}} and [todo]=”t”. Change detectors propagate bindings from the root to leaves in the depth first order.

Angular 2 does not have a generic mechanism implementing two-way data-bindings (But you can still implement the two-way data binding behavior and ng-model. Read more about it here.). That is why the change detection graph is a directed tree and cannot have cycles. This makes the system significantly more performant. And what is more important we gain guarantees that make the system more predictable and easier debug.

How Fast Is It?

By default the change detection goes through every node of the tree to see if it changed, and it does it on every browser event. Although it may seem terribly inefficient, the Angular 2 change detection system can go through hundreds of thousands of simple checks (the number are platform dependent) in a few milliseconds. How we managed to achieve such an impressive result is a topic for another blog post.

Angular has to be conservative and run all the checks every single time because the JavaScript language does not give us object mutation guarantees. But we may know that certain properties hold if we, for example, use immutable or observable objects. Previously Angular could not take advantage of this, now it will.

If a component depends only on its input properties, and they are immutable, then this component can change if and only if one of its input properties changes. Therefore, we can skip the component’s subtree in the change detection tree until such an event occurs. When it happens, we can check the subtree once, and then disable it until the next change (gray boxes indicate disabled change detectors). 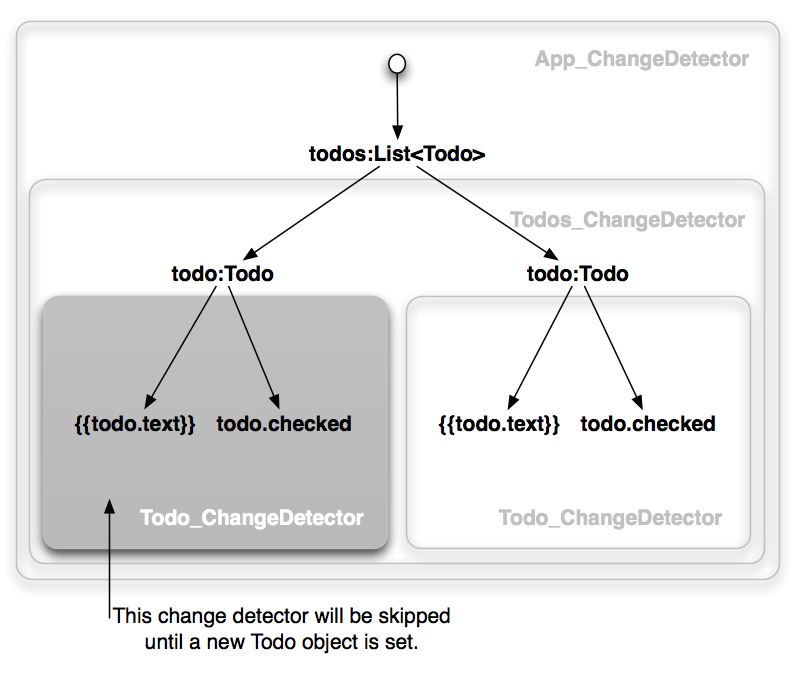 If we are aggressive about using immutable objects, a big chunk of the change detection tree will be disabled most of the time. 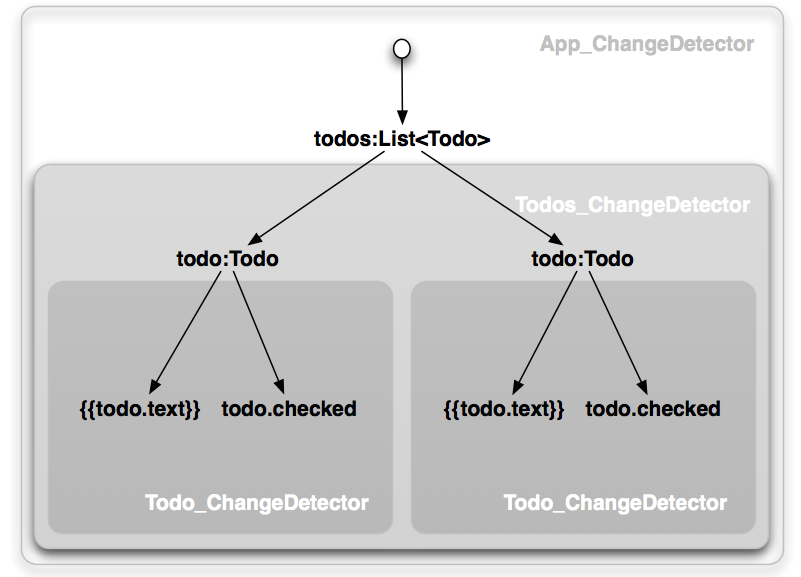 Implementing this is trivial. Just set the change detection strategy to OnPush.

It is worth noting that a component can still have private mutable state as long as it changes only due to inputs being updated or an event being fired from within the component’s template. The only thing the OnPush strategy disallows is depending on shared mutable state. Read more about it here.

If a component depends only on its input properties, and they are observable, then this component can change if and only if one of its input properties emits an event. Therefore, we can skip the component’s subtree in the change detection tree until such an event occurs. When it happens, we can check the subtree once, and then disable it until the next change.

Although it may sound similar to the Immutable Objects case, it is quite different. If you have a tree of components with immutable bindings, a change has to go through all the components starting from the root. This is not the case when dealing with observables.

Let me sketch out a small example demonstrating the issue.

As you can see, here the Todos component has only a reference to an observable of an array of todos. So it cannot see the changes in individual todos.

The way to handle it is to check the path from the root to the changed Todo component when its todo observable fires an event. The change detection system will make sure this happens.

Say our application uses only observable objects. When it boots, Angular will check all the objects.

So the state after the first pass will look as follows.

Let’s say the first todo observable fires an event. The system will switch to the following state:

Assuming that changes happen rarely and the components form a balanced tree, using observables changes the complexity of change detection from O(N) to O(logN), where N is the number of bindings in the system.

This capability is not tied to any particular library. Teaching Angular about any observable library is a matter of a few lines of code.

Do observables cause cascading updates?

Observable objects have bad reputation because they can cause cascading updates. Anyone who has experience in building large applications in a framework that relies on observable models knows what I am talking about. One observable object update can cause a bunch of other observable objects trigger updates, which can do the same. Somewhere along the way views get updated. Such systems are very hard to debug.

Using observable objects in Angular 2 as shown above will not have this problem. An event triggered by an observable just marks a path from the component to the root as to be checked next time. Then the normal change detection process kicks in and goes through the nodes of the tree in the depth first order. So the order of updates does not change whether you use observables or not. This is very important. Using an observable object becomes a simple optimization that does not change the way you think about the system.

Do I have to use observable/immutable objects everywhere to see the benefits?