This post is the second in the series ECC: a gentle introduction.

In the previous post, we have seen how elliptic curves over the real numbers can be used to define a group. Specifically, we have defined a rule for point addition: given three aligned points, their sum is zero ($P + Q + R = 0$). We have derived a geometric method and an algebraic method for computing point additions.

Now we will restrict our elliptic curves to finite fields, rather than the set of real numbers, and see how things change.

The field of integers modulo _p_

A finite field is, first of all, a set with a finite number of elements. An example of finite field is the set of integers modulo $p$, where $p$ is a prime number. It is generally denoted as $\mathbb{Z}/p$, $GF(p)$ or $\mathbb{F}_p$. We will use the latter notation.

In fields we have two binary operations: addition (+) and multiplication (·). Both are closed, associative and commutative. For both operations, there exist a unique identity element, and for every element there's a unique inverse element. Finally, multiplication is distributive over the addition: $x \cdot (y + z) = x \cdot y + x \cdot z$.

The set of integers modulo $p$ consists of all the integers from 0 to $p - 1$. Addition and multiplication work as in modular arithmetic (also known as "clock arithmetic"). Here are a few examples of operations in $\mathbb{F}_{23}$:

If these equations don't look familiar to you and you need a primer on modular arithmetic, check out Khan Academy.

As we already said, the integers modulo $p$ are a field, and therefore all the properties listed above hold. Note that the requirement for $p$ to be prime is important! The set of integers modulo 4 is not a field: 2 has no multiplicative inverse (i.e. the equation $2 \cdot x \bmod{4} = 1$ has no solutions).

Computing the multiplicative inverse can be "easily" done with the extended Euclidean algorithm, which is $O(\log p)$ (or $O(k)$ if we consider the bit length) in the worst case.

We won't enter the details of the extended Euclidean algorithm, as it is off-topic, however here's a working Python implementation: What previously was a continuous curve is now a set of disjoint points in the $xy$-plane. But we can prove that, even if we have restricted our domain, elliptic curves in $\mathbb{F}_p$ still form an abelian group.

Clearly, we need to change a bit our definition of addition in order to make it work in $\mathbb{F}_p$. With reals, we said that the sum of three aligned points was zero ($P + Q + R = 0$). We can keep this definition, but what does it mean for three points to be aligned in $\mathbb{F}_p$? 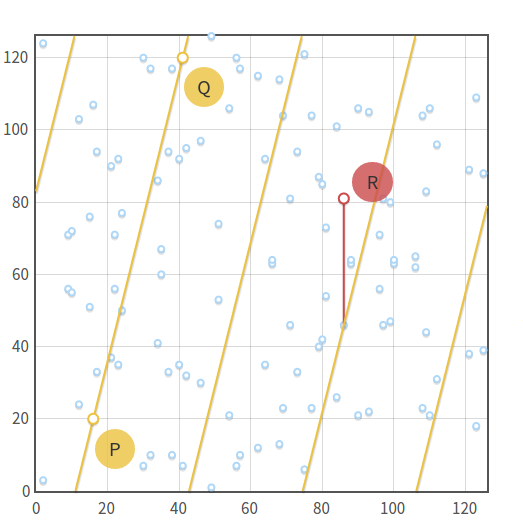 Given that we are in a group, point addition retains the properties we already know:

It's not a coincidence that the equations have not changed: in fact, these equations work in every field, finite or infinite (with the exception of $\mathbb{F}_2$ and $\mathbb{F}_3$, which are special cased). Now I feel I have to provide a justification for this fact. The problem is: proofs for the group law generally involve complex mathematical concepts. However, I found out a proof from Stefan Friedl that uses only elementary concepts. Read it if you are interested in why these equations work in (almost) every field.

Back to us — we won't define a geometric method: in fact, there are a few problems with that. For example, in the previous post, we said that to compute $P + P$ we needed to take the tangent to the curve in $P$. But without continuity, the word "tangent" does not make any sense. We can workaround this and other problems, however a pure geometric method would just be too complicated and not practical at all.

Instead, you can play with the interactive tool I've written for computing point additions.

The order of an elliptic curve group

We said that an elliptic curve defined over a finite field has a finite number of points. An important question that we need to answer is: how many points are there exactly?

Firstly, let's say that the number of points in a group is called the order of the group.

Luckily, there's a faster algorithm for computing the order: Schoof's algorithm. I won't enter the details of the algorithm — what matters is that it runs in polynomial time, and this is what we need.

And, again, we can use the double and add algorithm to perform multiplication in $O(\log n)$ steps (or $O(k)$, where $k$ is the number of bits of $n$). I've written an interactive tool for scalar multiplication too.

The multiples of $P = (3, 6)$ are just five distinct points ($0$, $P$, $2P$, $3P$, $4P$) and they are repeating cyclically. It's easy to spot the similarity between scalar multiplication on elliptic curves and addition in modular arithmetic.

Here we can immediately spot two things: firstly, the multiples of $P$ are just five: the other points of the elliptic curve never appear. Secondly, they are repeating cyclically. We can write:

for every integer $k$. Note that these five equations can be "compressed" into a single one, thanks to the modulo operator: $kP = (k \bmod{5})P$.

Not only that, but we can immediately verify that these five points are closed under addition. Which means: however I add $0$, $P$, $2P$, $3P$ or $4P$, the result is always one of these five points. Again, the other points of the elliptic curve never appear in the results.

Cyclic subgroups are the foundations of ECC and other cryptosystems. We will see why in the next post.

We can ask ourselves what the order of a subgroup generated by a point $P$ is (or, equivalently, what the order of $P$ is). To answer this question we can't use Schoof's algorithm, because that algorithm only works on whole elliptic curves, not on subgroups. Before approaching the problem, we need a few more bits:

These two information together give us a way to find out the order of a subgroup with base point $P$:

Note that it's important to take the smallest divisor, not a random one. If we proceeded randomly, we could have taken $n = 14$, which is not the order of the subgroup, but one of its multiples.

Finding a base point

For our ECC algorithms, we want subgroups with a high order. So in general we will choose an elliptic curve, calculate its order ($N$), choose a high divisor as the subgroup order ($n$) and eventually find a suitable base point. That is: we won't choose a base point and then calculate its order, but we'll do the opposite: we will first choose an order that looks good enough and then we will hunt for a suitable base point. How do we do that?

Firstly, we need to introduce one more term. Lagrange's theorem implies that the number $h = N / n$ is always an integer (because $n$ is a divisor of $N$). The number $h$ has a name: it's the cofactor of the subgroup.

Now consider that for every point of an elliptic curve we have $NP = 0$. This happens because $N$ is a multiple of any candidate $n$. Using the definition of cofator, we can write: $$n(hP) = 0$$

Now suppose that $n$ is a prime number (for reason that will be explained in the next post, we prefer prime orders). This equation, written in this form, is telling us that the point $G = hP$ generates a subgroup of order $n$ (except when $G = hP = 0$, in which case the subgroup has order 1).

In the light of this, we can outline the following algorithm:

Note that this algorithm only works if $n$ is a prime. If $n$ wasn't a prime, then the order of $G$ could be one of the divisors of $n$.

As we did when working with continuous elliptic curves, we are now going to discuss the question: if we know $P$ and $Q$, what is $k$ such that $Q = kP$?

This problem, which is known as the discrete logarithm problem for elliptic curves, is believed to be a "hard" problem, in that there is no known polynomial time algorithm that can run on a classical computer. There are, however, no mathematical proofs for this belief.

This problem is also analogous to the discrete logarithm problem used with other cryptosystems such as the Digital Signature Algorithm (DSA), the Diffie-Hellman key exchange (D-H) and the ElGamal algorithm — it's not a coincidence that they have the same name. The difference is that, with those algorithms, we use modulo exponentiation instead of scalar multiplication. Their discrete logarithm problem can be stated as follows: if we know $a$ and $b$, what's $k$ such that $b = a^k \bmod{p}$?

Both these problems are "discrete" because they involve finite sets (more precisely, cyclic subgroups). And they are "logarithms" because they are analogous to ordinary logarithms.

What makes ECC interesting is that, as of today, the discrete logarithm problem for elliptic curves seems to be "harder" if compared to other similar problems used in cryptography. This implies that we need fewer bits for the integer $k$ in order to achieve the same level of security as with other cryptosystems, as we will see in details in the fourth and last post of this series.

Next week's post will be the third in this series and will be about ECC algorithms: key pair generation, ECDH and ECDSA. That will be one of the most interesting parts of this series. Don't miss it!