Interviewer: “Please whiteboard an algorithm that Counts the leaves in a tree/Solves Towers of Hanoi/Random pet recursion problem.”

Interviewee: “Ok… Scribble, scribble… That should do it.”

Interviewer: “That looks like it works, but can you convert it to an iterative solution?”

However, what we can say with certainty is that knowing how to implement a recursive algorithm with iteration is deeply interesting! And as a bonus, this knowledge is useful when we do encounter one of the situations where we want to convert an algorithm that is normally recursive into an iterative algorithm.

Even if we never encounter this exact question in an interview. 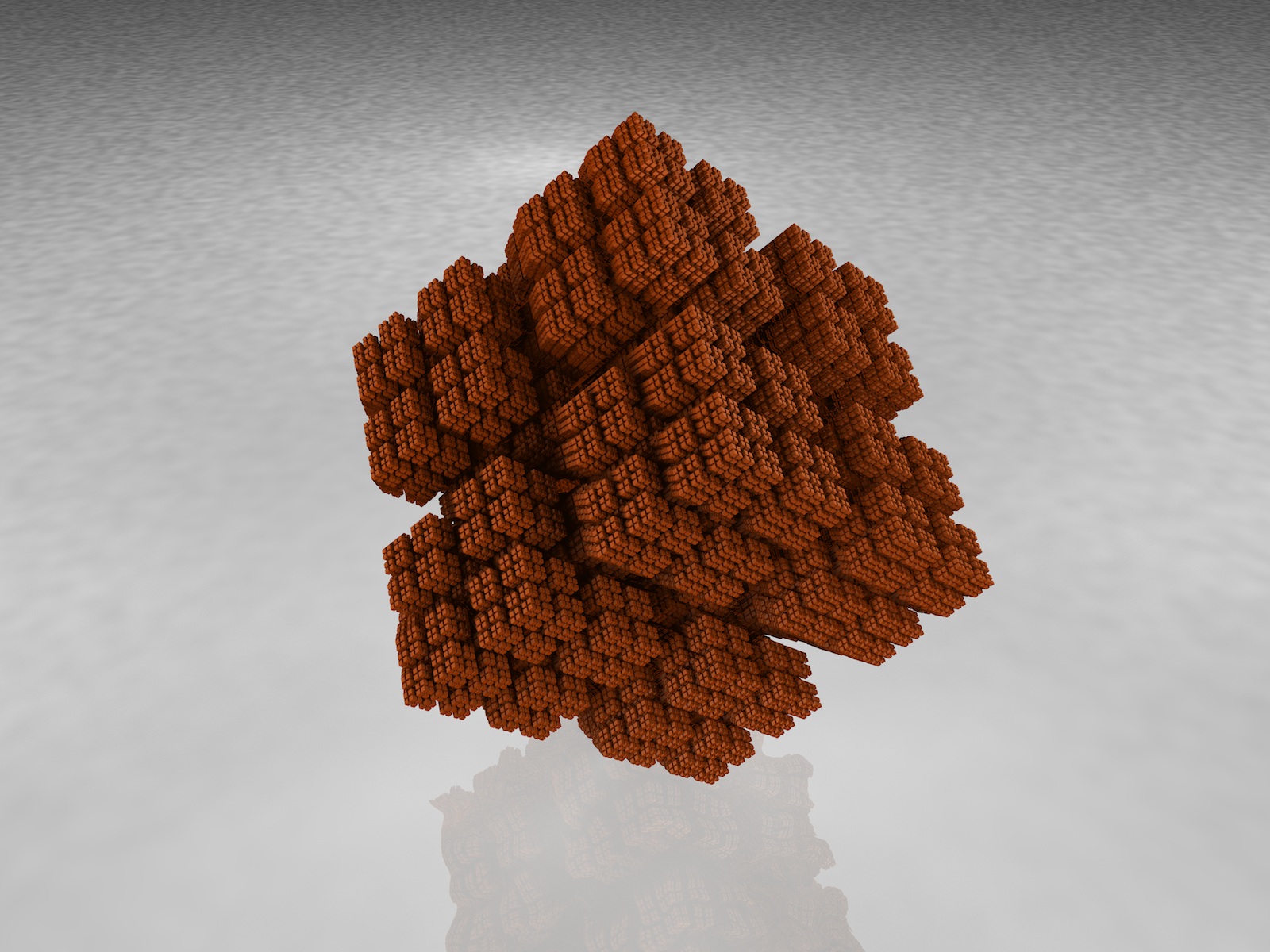 The shallow definition of a recursive algorithm is a function that directly or indirectly calls itself. Digging a little deeper, most recursive algorithms address the situation where the solution to a problem can be obtained by dividing it into smaller pieces that are similar to the initial problem, solving them, and then combining the solution.

This is a classic divide-and-conquer: Divide a tree up into its children, and count the leaves in child, then sum them to get the count of leaves in the tree.

For the vast majority of cases, recursive algorithms are just fine. This is especially true when the form of the algorithm matches the form of the data being manipulated. A recursive algorithm to “fold” the elements of a tree makes a certain amount of sense because the definition of a tree is itself recursive: A tree is either a left or another tree. And the function we just saw either returns 1 or the count of leaves in a tree.

But sometimes people want iterative algorithms. It could be that recursion eats up to much stack space, and they would rather consume heap space. It could be that they just don’t like recursive algorithms. Or… Who knows? Our purpose here is not to fall down a hole of discussing performance and optimization, we’d rather fall down a hole of exploring what kinds of interesting techniques we might use to transform recursion into iteration.

Let’s start with the simplest, and one that works remarkably well: 1: hide the recursion with iterators

Our algorithm above interleaves the mechanics of visiting every node in a tree with the particulars of what we want to do with leaf nodes. Let’s say that we want to be able to express that countLeaves is all about counting the number of nodes with a non-null leaf property, but we don’t want to clutter that up with recursion.

The easiest way to do that is to keep using recursion, but separate the concern of how to visit all the nodes in a tree from the concern of what we want to do with them. In JavaScript, we can make our trees into Iterables:

Notice now that countLeaves is iterative. The recursion has been pushed into Tree’s iterator. It’s still recursive in the whole, but the code that knows how to count leaves is certainly iterative.

And of course, we can apply functions over iterables, for example:

This is great because our functions over iterables apply to a wide class of problems, not just recursive problems. So the takeaway is, one technique for turning recursive algorithms into iterative algorithms is to see whether we can recursively iterate. If so, separate the recursive iteration from the rest of the algorithm by writing an iterator. 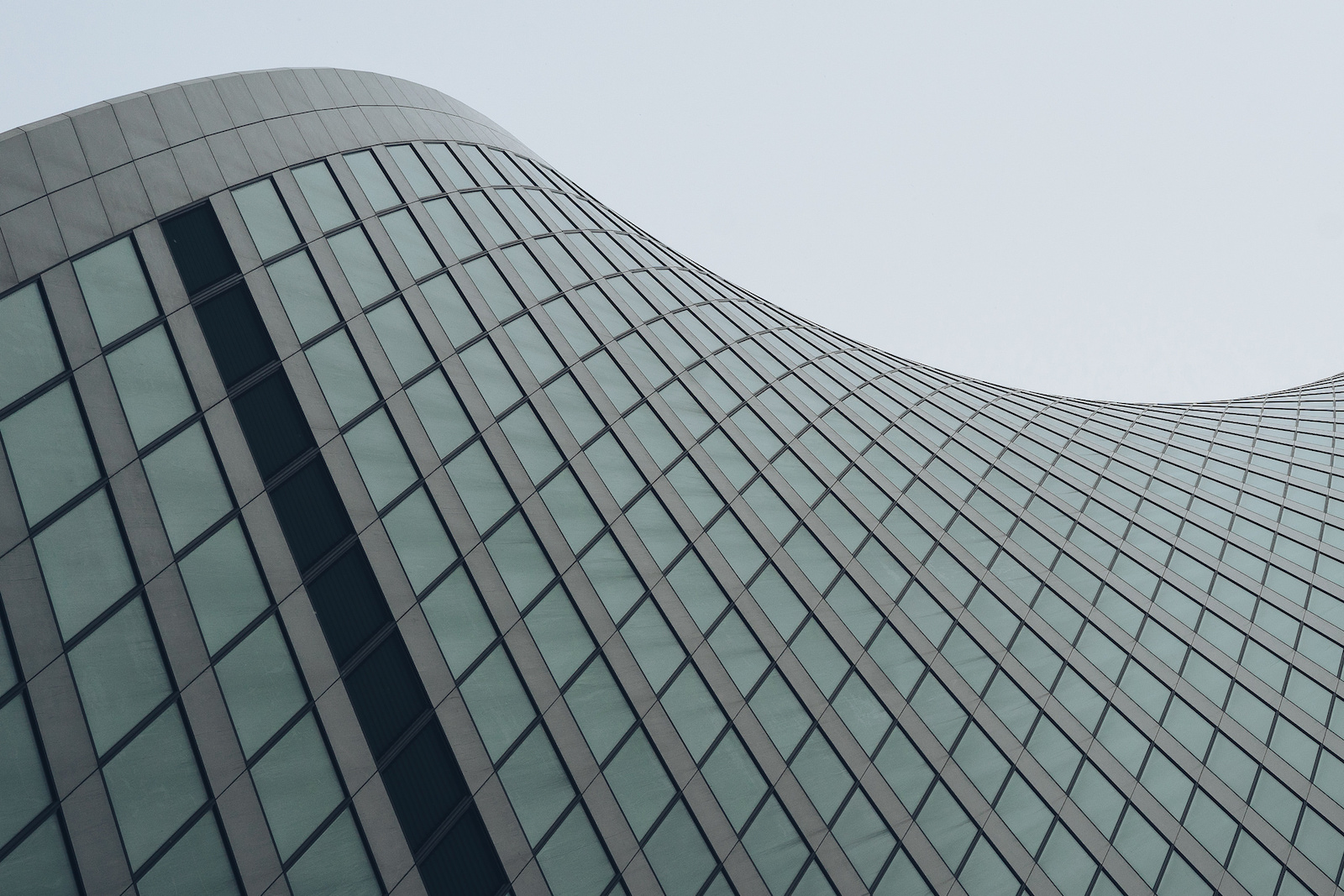 Divide-and-conquer comes up a lot, but it’s not always directly transferrable to iteration. For example, we might want to recursively rotate a square. If we want to separate the mechanics of recursion from the “business logic” of rotating a square, we could move some of the logic into a higher-order function, multirec.

multirec is a template function that implements n-ary recursion:1

To use multirec, we plug four functions into its template:

Now, this does separate the implementation of a divide-and-conquer recursive algorithm from what we want to accomplish, but it’s still obvious that we’re doing a divide and conquer algorithm. Balanced against that, multirec can do a lot more than we can accomplish with a recursive iterator, like rotating squares, implementing HashLife, or even finding a solution to the Towers of Hanoi. 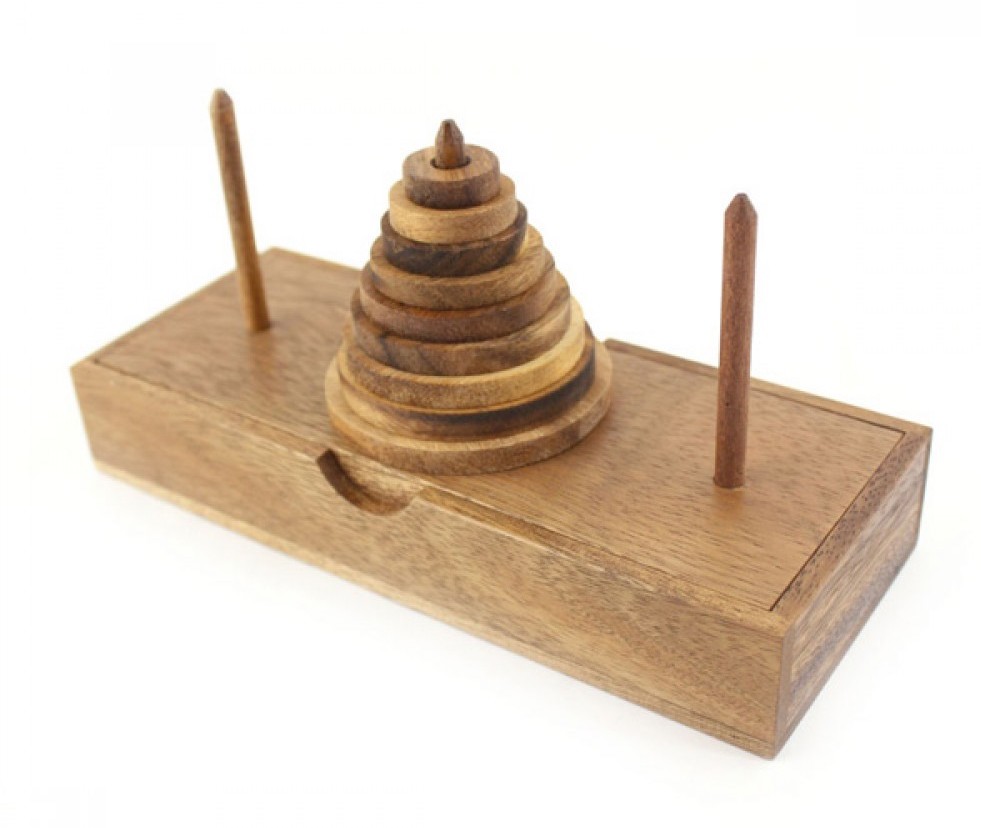 Speaking of the Towers of Hanoi… Not all recursive algorithms map neatly to recursive data structures. The recursive solution to the Towers of Hanoi is a good example. We’ll use multirec, demonstrating that we can separate the mechanics of recursion from our code for anything recursive, not just algorithms that work with trees. Let’s start with the function signature:

Our four elements will be: 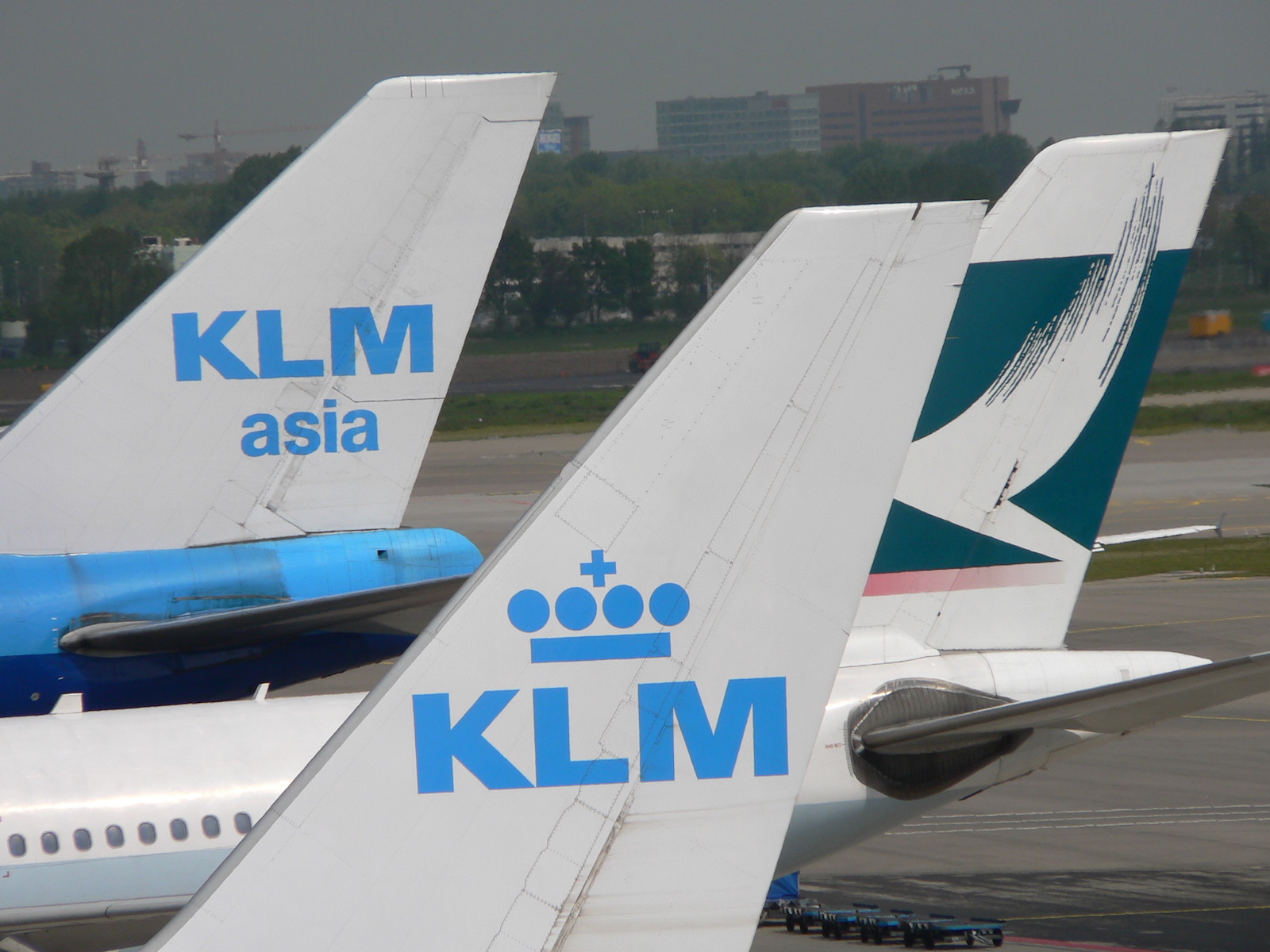 Some recursive algorithms are much simpler than traversing a tree or generating solutions to the Towers of Hanoi. For example, the algorithm for computing Fibonacci numbers.

No, not that algorithm, the one we are thinking of involves matrix exponentiation, and you can read all about it here. In the middle of that algorithm, we have the need to multiply matrices by each other. We’ll repeat the same logic here, only using integers so that we can focus on the recursion.

Let’s start with a generic function for multiplying one or more numbers:

If we want to find the exponent of a number, the naïve algorithm is to multiply it by itself repeatedly. We’ll use unnecessarily clever code to implement the trick, like this:

Besides the obvious of dropping down into the language’s library routines, there is a valuable optimization available. Exponentiation should not require “O-n” operations, it should be “O-log2-n.” We get there with recursion:

Instead of performing 15 multiplications, the recursive algorithm performs four multiplications. That saves a lot of stack, if that’s our concern with recursion. But there is an interesting opportunity here. The stack is needed because after power calls itself, it does a bunch more work before returning a result.

If we can find a way for power to avoid doing anything except returning the result of calling itself, we have a couple of optimizations available to ourselves. So let’s arrange things such that when power calls itself, it returns the result right away. The “one weird trick”” is to supply an extra parameter, so that the work gets done eventually, but not after power calls itself:2

Our power functions recursion is now a tail call meaning that when it calls itself, it returns that result right away, it doesn’t do anything else with it. Because it doesn’t do anything with the result, behind the scenes the language doesn’t have to store a bunch of information in a stack frame. In essence, it can treat the recursive call like a GOTO instead of a CALL.

Many functional languages optimize this case. While our code may look like recursion, in such a language, our implementation of power it would execute in constant stack space, just like a loop.

Alas, tail calls in JavaScript have turned out to be a contentious issue. At the time of this writing, Safari is the only browser implementing tail call optimization. So, while this is a valid optimization in some languages, and might be useful for a Safari-only application in JavaScript, it would be nice if there was something useful we could do now that we’ve done all the work of transforming power into tail-recursive form. 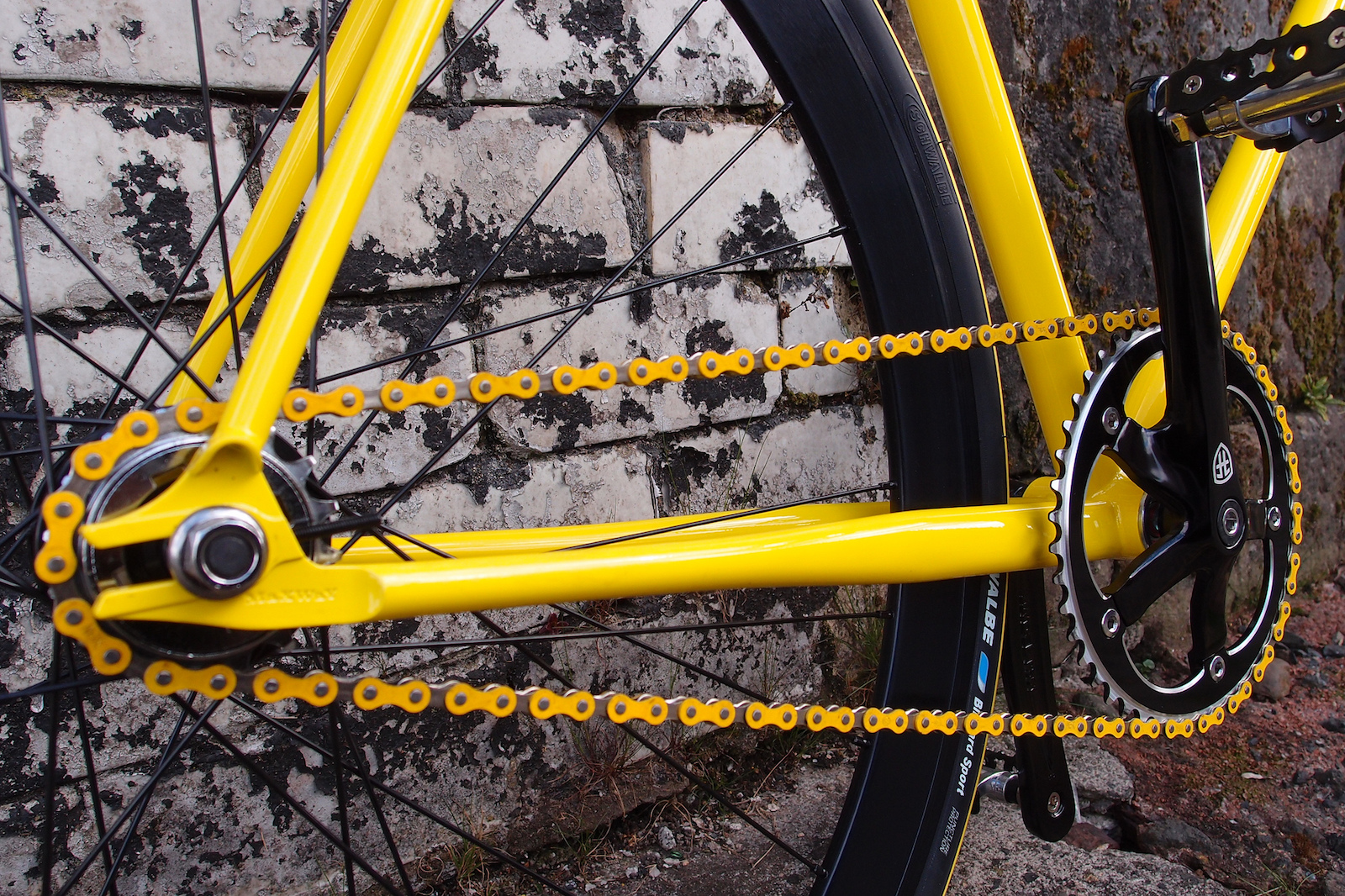 If we don’t want to leave the tail call optimization up to the compiler, with a tail-recursive function there’s a simple transformation we can perform: We wrap the whole thing in a loop, we reassign the parameters rather than passing parameters, and we use continue instead of invoking ourselves.

The continue is superfluous, but when converting other functions it becomes essential. With a bit of cleaning up, we get:

So we know that for a certain class of recursive function, we can convert it to iteration in two steps:

And presto, we get an algorithm that executes in constant stack space! Or do we?

Unfortunately, it is not always possible to execute a recursive function in constant space. power worked, because it is an example of linear recursion: At each step of the way, we execute on one piece of the bigger problem and then combine the result in a simple way with the rest of the problem.

Such algorithms can be transformed into loops, but the mechanism by which we store data to be worked on later will necessarily grow in some relation to the size of the problem. 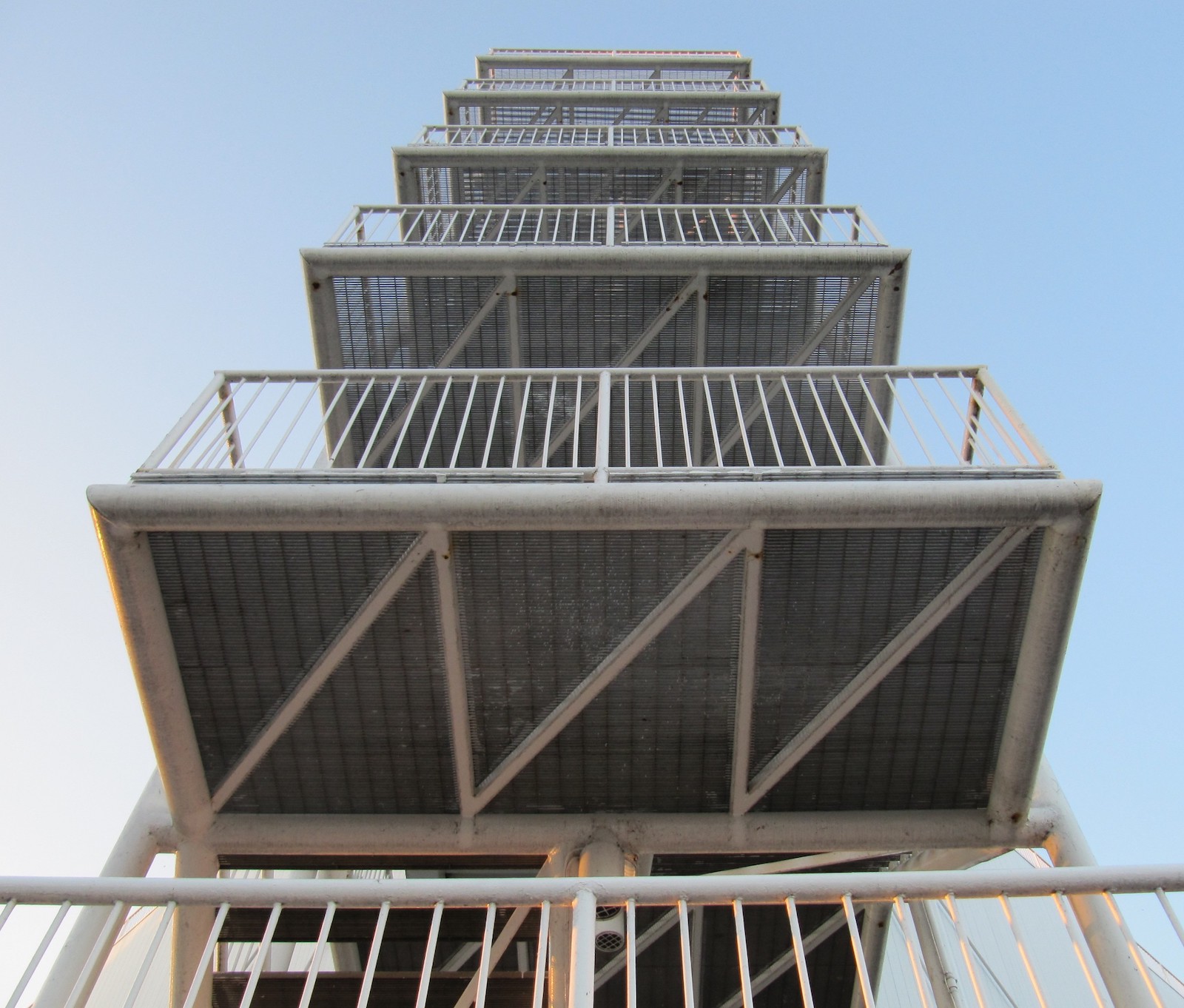 5. implement multirec with our own stack

It is possible to convert n-ary recursive algorithms to iterative versions, but not in constant space. What we can do, however, is move the need for “stacking” our intermediate results and work to be done out of the system stack and into our own explicit stack. Let’s give it a try.

That particular choice gives us the power of being able to express Towers of Hanoi as a divide-and-conquer algorithm, while implementing it using a stack on the heap. That’s terrific if our only objection to multirec is the possibility of a stack overflow.3

Our new multirec has its own stack, and is clearly iterative. It’s one big loop:

With this version of multirec, our Towers of Hanoi and countLeaves algorithms both have switched from being recursive to being iterative with their own stack. That’s the power of separating the specification of the divide-and-conquer algorithm from its implementation. 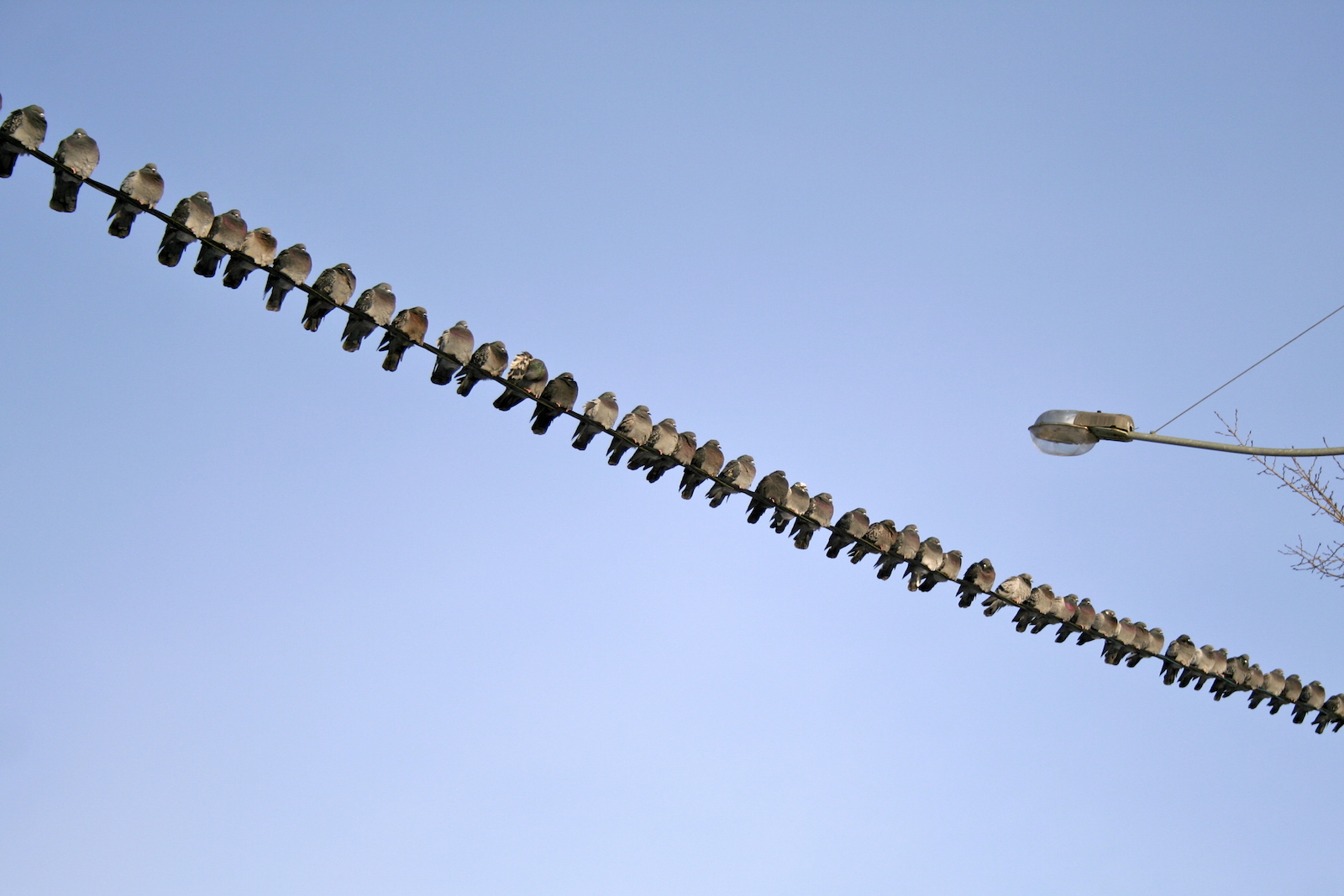 6. implementing depth-first iterators with our own stack

We can use a similar approach for iteration. Recall our Tree class:

Writing an iterator for a recursive data structure was useful for hiding recursion in the implementation, and it was also useful because we have many patterns, library functions, and language features (like for..of) that operate on iterables. However, the recursive implementation uses the system’s stack.

What about using our own stack, as we did with multirec? That would produce a nominally iterative solution:

And once again, we have no need to change any function relying on Tree being iterable to get a solution that does not consume the system stack. 7. implementing breadth-first iterators with a queue 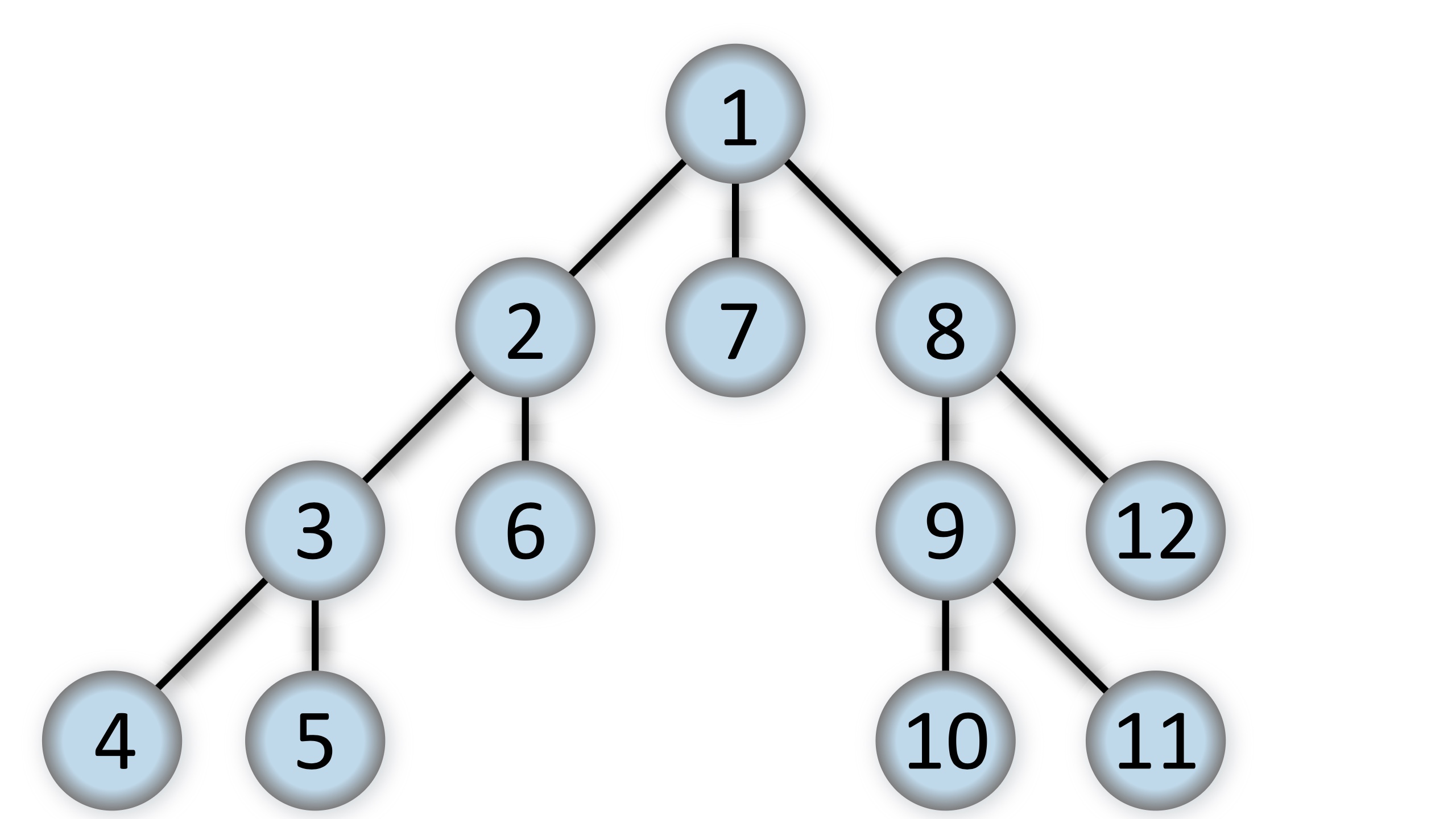 But for certain algorithms, we want to perform a breadth-first search: 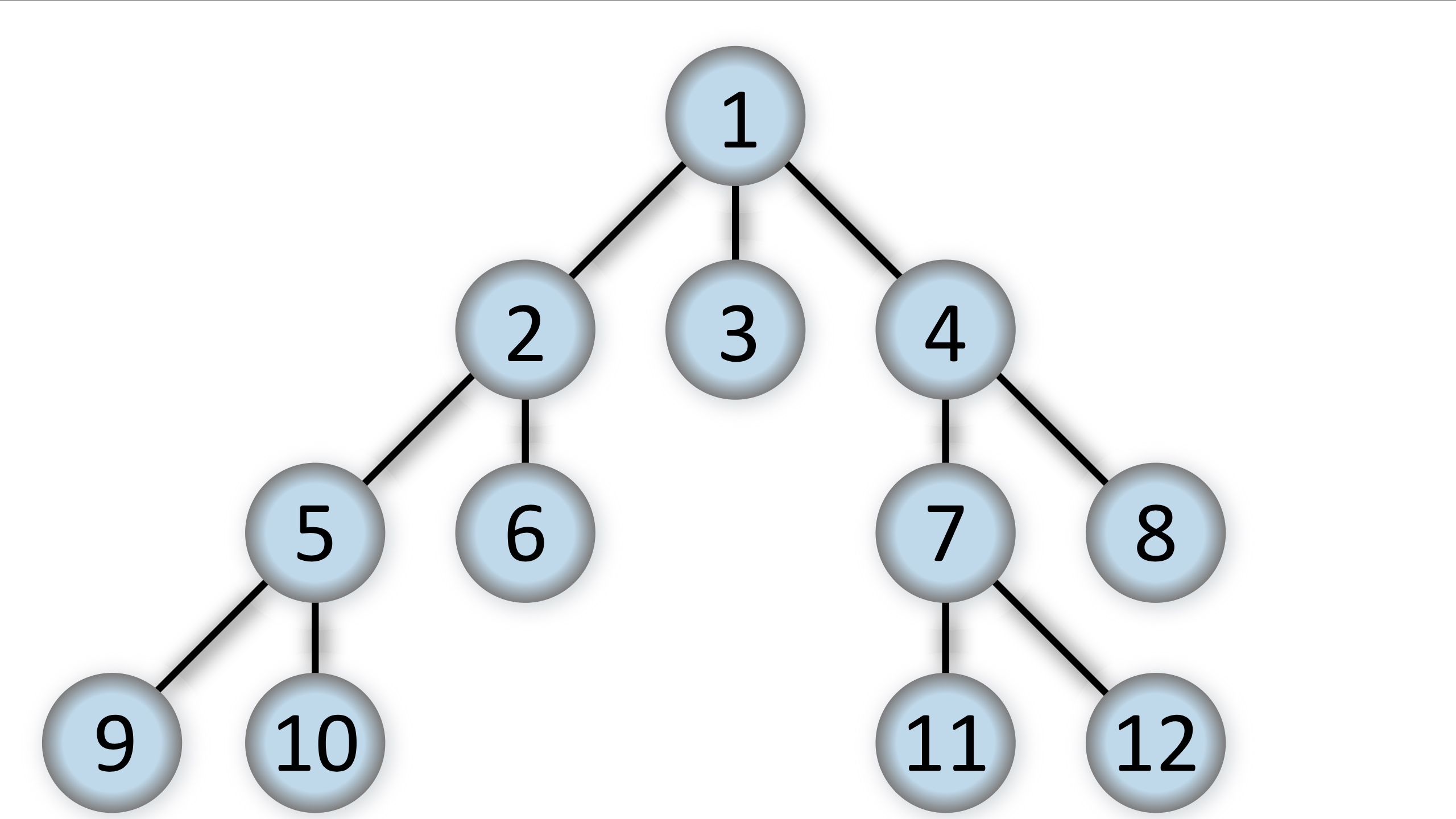 We can accomplish this using a queue instead of a stack:

And once again, we have no need to change any function relying on Tree being iterable to get a solution that does not consume the system stack. 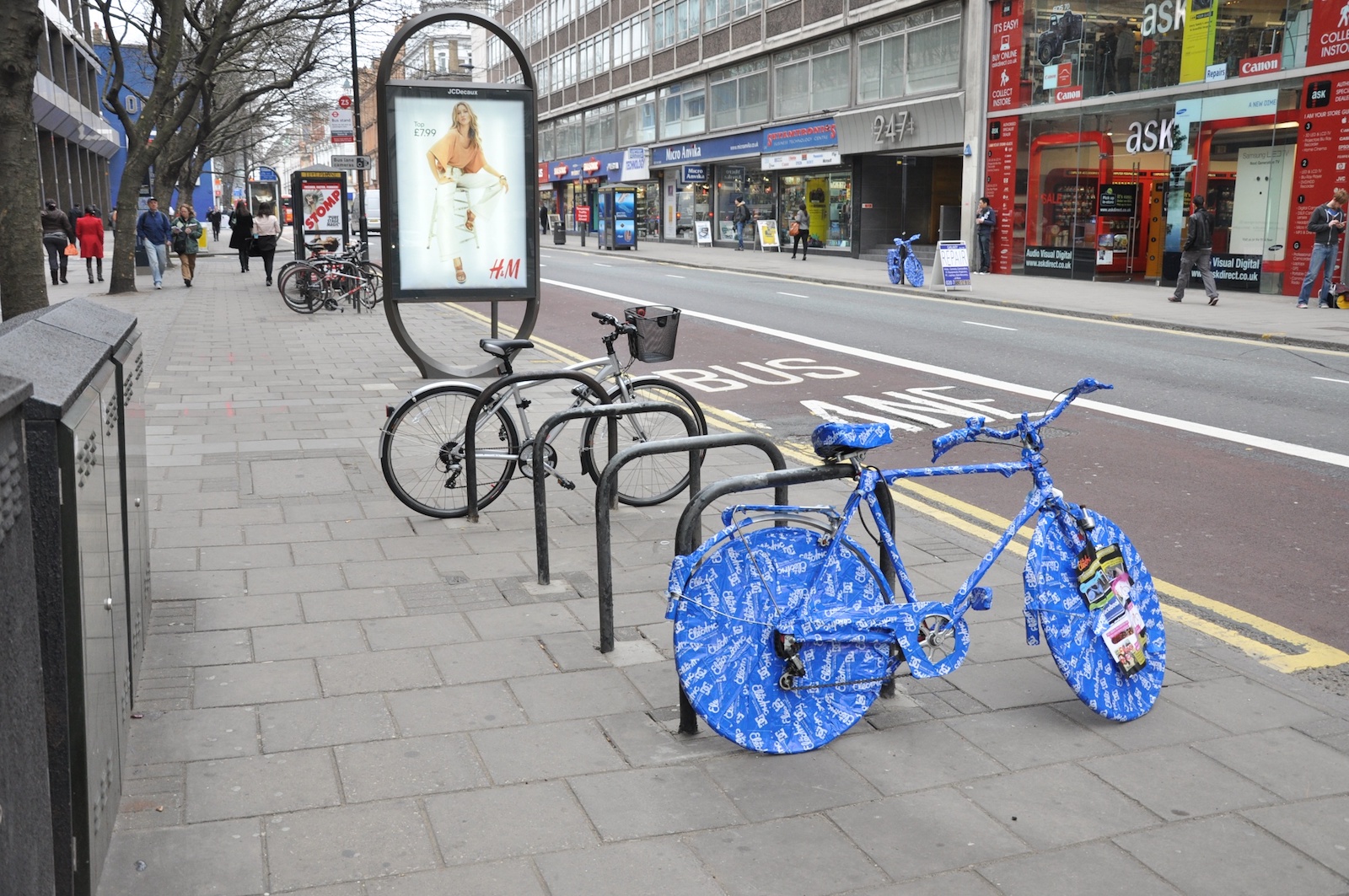 “Convert recursion to iteraction with tail calls” arranged our code such that a suitable programming language implementation would convert our recursive code into iteration automatically. “Convert tail-recursive functions into loops” showed how to do this manually for the case where the language wouldn’t do it for us, or if we’re allergic to recursion for other reasons.

So now, if we’re ever in an interview and our interlocutor asks, “Can you convert this algorithm to use iteration,” we can reply, “Sure! But there are at least seven different ways to do that, depending upon what we want to accomplish…”4