Streams For the Win: A Performance Comparison of NodeJS Methods for Reading Large Datasets (Pt 2)

How readFile(), createReadStream() and event-stream Stack Up Against One Another

If you’ve been keeping up with my writing, a few weeks ago, I published a blog talking about a variety of ways to use Node.js to read really large datasets.

To my surprise, it did exceptionally well with readers — this seemed (to me) like a topic many others have already covered in posts, blogs and forums, but for whatever reason, it got the attention of a lot of people. So, thank you to all of you who took the time to read it! I really appreciate it.

One particularly astute reader (Martin Kock), went so far as to ask how long it took to parse the files. It seemed as if he’d read my mind, because part two of my series on using Node.js to read really, really large files and datasets involves just that.

Here, I’ll evaluate the three different methods in Node.js I used to read the files, to determine which is most performant.

The Challenge From Part 1

I won’t go into the specifics of the challenge and solution, because you can read my first post for all the details here, but I will give you the high level overview.

A person from a Slack channel I’m a member of, posted a coding challenge he’d received, which involved reading in a very large dataset (over 2.5GB in total), parsing through the data and pulling out various pieces of information.

It challenged programmers to print:

As I worked towards my ultimate end goal of processing a large dataset, I came up with three solutions in Node.js.

The first involved Node.js’s native method of fs.readFile(), and consisted of reading in the whole file, holding it in memory and performing the operations on the entire file, then returning the results. At least for smaller files, it worked, but when I got to the largest file size, my server crashed with a JavaScript heap out of memory error.

My second solution also involved another couple of methods native to Node.js: fs.createReadStream() and rl.readLine(). In this iteration, the file was streamed through Node.js in an input stream, and I was able to perform individual operations on each line, then cobble all those results together in the output stream. Again, this worked pretty well on smaller files, but once I got to the biggest file, the same error happened. Although Node.js was streaming the inputs and outputs, it still attempted to hold the whole file in memory while performing the operations (and couldn’t handle the whole file).

In the end, I came up with only one solution in Node.js that was able to handle the full 2.55GB file I wanted to parse through, at one time.

Fun fact: Node.js can only hold up to 1.67GB in memory at any one time, after that, it throws JavaScript heap out of memory error.

My solution involved a popular NPM package called event-stream, which actually let me perform operations on the throughput stream of data, instead of just the input and output streams, as Node.js’s native capabilities allow.

You can see all three of my solutions here in Github.

And I solved the problem, which was my initial goal, but it got me thinking: was my solution really the most performant of the three options?

Comparing Them To Find The Optimal Solution

Now, I had a new goal: determine which of my solutions was best.

Since I couldn’t use the full 2.55GB file with the Node.js native solutions, I chose to use one of the smaller files that was about 400MB worth of data, that I’d used for testing while I was developing my solutions.

For performance testing Node.js, I came across two ways to keep track of the file and individual function processing times, and I decided to incorporate both to see how great the differences were between the two methods (and make sure I wasn’t completely off the rails with my timing).

Node.js has some handy, built-in methods available to it for timing and performance testing, called console.time() and console.timeEnd(), respectively. To use these methods, I only had to pass in the same label parameter for both time() and timeEnd(), like so, and Node’s smart enough to output the time between them after the function’s done.

That’s one method I used to figure out how long it took to process the dataset.

The other, tried and well-liked performance testing module I came across for Node.js is hosted on NPM as performance-now.

7+ million downloads per week from NPM, can’t be too wrong, right??

Implementing the performance-now module into my files was also almost as easy as the native Node.js methods, too. Import the module, set a variable for the start and end of the instantiation of the method, and compute the time difference between the two.

I figured that by using both Node’s console.time() and performance-now at the same time, I could split the difference and get a pretty accurate read on how long my file parsing functions were really taking.

Below are code snippets implementing console.time() and performance-now in each of my scripts. These are only snippets of one function each — for the full code, you can see my repo here.

Since this script is using the fs.readFile() implementation, where the entire file is read into memory before any functions are executed on it, this is the most synchronous-looking code. It’s not actually synchronous, that’s an entirely separate Node method called fs.readFileSync(), it just resembles it .

But it’s easy to see the total line count of the file and the two timing methods bookending it to determine how long it takes to execute the line count.

Output Stream (once full file’s been read during input):

As the second solution using fs.createReadStream() involved creating an input and output stream for the file, I broke the code snippets into two separate screenshots, as the first is from the input stream (which is running through the code line by line) and the second’s the output stream (compiling all the resulting data).

The event-stream solution looks pretty similar to the fs.createReadStream(), except instead of an input stream, the data is processed in a throughput stream. And then once the whole file’s been read and all the functions have been done on the file, the stream’s ended and the required information is printed out.

Now on to the moment we’ve all been waiting for: the results!

I ran all three of my solutions against the same 400MB dataset, which contained almost 2 million records to parse through.

Streams for the wins!

The percentage improvements are included at the end of the table above as well, for reference.

fs.readFile() just got blown out of the water by the competition. By streaming the data, processing times for the file improved by at least 78% — sometimes close to almost a 100%, which is pretty darn, impressive.

Below are the raw screenshots from my terminal for each of my solutions.

The solution using only: fs.readFlie() 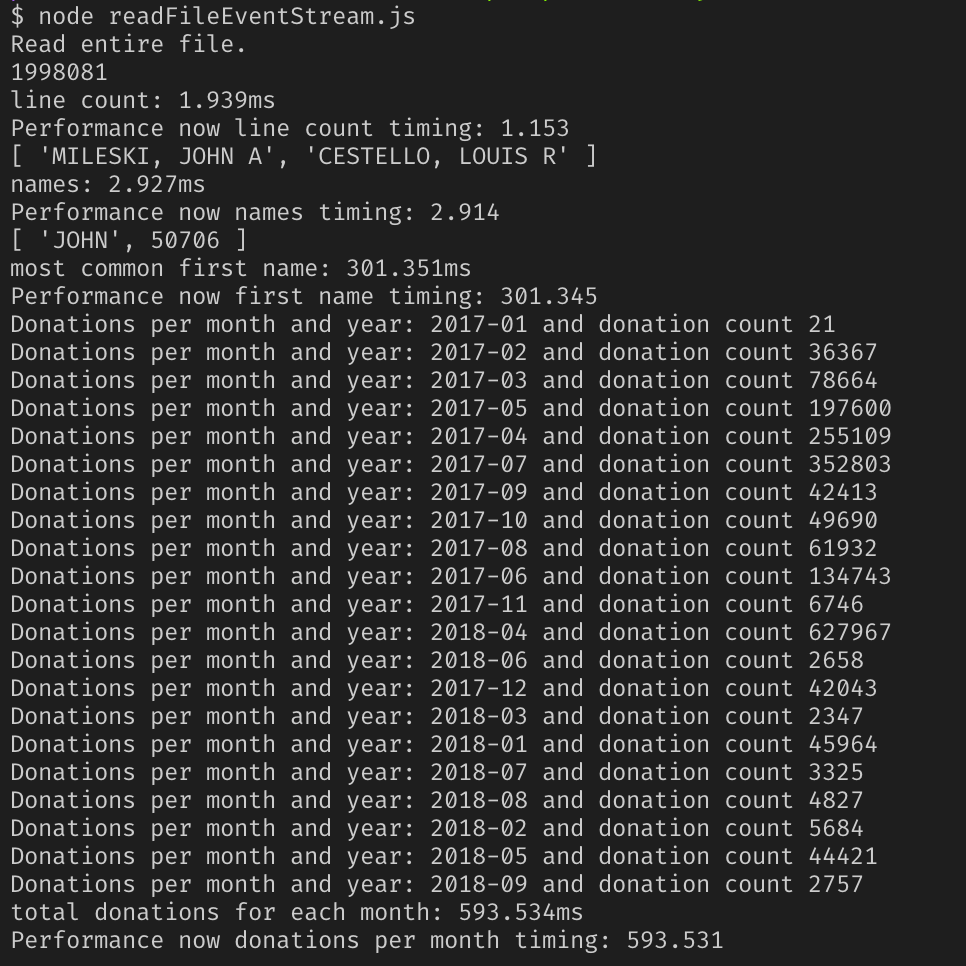 Here’s a screenshot of my event-stream solution churning through the 2.55GB monster file, as well. And here’s the time difference between the 400MB file and the 2.55GB file too.

Look at those blazing fast speeds,even as the file size climbs by almost 6X

In the end, streams both native to Node.js and not, are way, WAY more efficient at processing large data sets.

Thanks for coming back for part 2 of my series using Node.js to read really, really large files. If you’d like to read the first blog again, you can get it here.

I’ll be back in a couple weeks with a new JavaScript topic — possibly debugging in Node or end-to-end testing with Puppeteer and headless Chrome, so please follow me for more content.

Thanks for reading, I hope this gives you an idea of how to handle large amounts of data with Node.js efficiently and performance test your solutions. Claps and shares are very much appreciated!